“Why didn’t you raise your hand?”

It was a question that stopped Jackie Wszalek in her tracks, asked by Michelle Micalizza, an artist who creates pieces inspired by entrepreneurs. Micalizza was showing a series for her Fearlessly Deliver project. Wszalek wondered aloud why none of the pieces featured women.

“[Micalizza asked] a good question,” Wszalek says. “Why didn’t I put myself out there? Why didn’t I raise my hand?”

It’s a problem that happens far too often among women in business, she says. 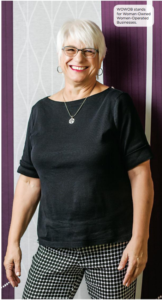 Wszalek is the owner and president of Splash Printing and Marketing in the Scottsdale Airpark, but she recently launched a passion project, WOWOB, an online directory of women-owned businesses intended to help garner attention – and revenue – for lady entrepreneurs around the Valley.

Wszalek, after an early career in the construction printing indus-try, bought Despins Printing in 2009, which had been in operation in the Airpark for more than 30 years. In 2015, she changed the name to Splash Printing and Marketing. Now she and her team of fi ve employees take care of their customers in front of the shop, and around the back, relieve the day’s stresses stretching out in the on-site yoga studio.

WOWOB is Wszalek’s way of raising her hand and off ering help to other women just like her, who are running and operating their own businesses.

“But I believe we can have heart and still be profi table,” she adds.

WOWOB, an acronym for Women-Owned Woman-Operated Business and pronounced woah-wahb, is more than just a listing of ladies’ businesses; Wszalek hopes it’s the start of a movement to empower women more broadly.

“It’s time for women business leaders to show up,” she says. “We need to stand up and put our face out there. I truly believe that if you can see it you can be it.”

In addition to running her own printing business and WOWOB, Wszalek is heavily involved in organizations like NAWBO (National Association of Women Business Owners) and other women’s groups around the Valley. She hopes that WOWOB can serve as a tool to aggregate the work of the more than 380 women’s groups she says, based on her research, are already up and running around metro Phoenix.

“I wanted to get some language around why you should buy from women business owners,” she adds.

A business can become a WOWOB if it is at least 50 percent owned by one or more women, and a woman is involved in the day-to-day operations and has upper-level decision-making authority, according to the WOWOB website. Fees are based on business size, but a company with one to fi ve employees can become a WOWOB for about $45 a year. In addition to the listing in the WOWOB online directory, membership also includes a decal, invitations to special events and what Wszalek says is “the great feeling you get when helping women achieve economic parity.”

The WOWOB directory just launched in March and currently has more than 50 members, but the goal is to have 50 to 60 percent of women-owned businesses in the area signed up by the end of the year, Wszalek says.

Michelle Thelen, owner of AZ Hot Tees and Sunstate Embroidery based in Phoenix, was one of the fi rst WOWOB members, lured to the organization by the opportunity for camaraderie among women striving for entrepreneurial success.

“I fi nally got to meet other women who own businesses,” Thelen says. “They were so much like me. They wanted success – just like I do – but at the end of the day, they didn’t measure it by just the bottom line; they measured it by the satisfaction and help they were able to extend to all the people that they come in contact with. That’s why I joined WOWOB – to be able to connect with more women like me. And most importantly, support those women.”

The WOWOB launch party will be held at Splash Printing in the Airpark on May 17 from 4 to 6 p.m. and is open to business owners and their supporters.

Wszalek hope to spark a movement to empower women in business.

“We want to convince people that if you have a choice, make the choice to buy from women,” Wszalek says. “We stand on the shoulder pads of the women who came before us. Women in business out there who want a mentor; she can come and talk to me. It’s time to stand up and put a diff erent face on leadership.” 

Check Out The Article Here

A Guide To Print-Ready Files